Welcome to a recap on the Netflix Q3 2022 results with an emphasis on the kids content strategy for the streamer in the future.

Please note: this newsletter was first published on the Kids Streamersphere on LinkedIn.

Netflix Q3 earnings hit on October 18th, and OMG can you feel the relief from Reed?

Aside from subscriber numbers being UP(!), modestly, from a volume point of view, it has been a busy fortnight of headlines for the streamer. Earnings gave the opportunity for more clarity on these, including:

A softening on theatrical exclusivity… Glass Onion: A Knives Out Mystery gets the broadest cinema release ever seen by a Netflix movie. Definitely not full scale, but 600 screens in the US over Thanksgiving weekend, with more in the UK, Italy, Germany and beyond, is well above the limited releases we’ve seen before. Having said that, the short 7-day window and lack of advertising spend points to this being a marketing, rather than a revenue, exercise.

The company basically confirmed this on the earnings call, saying it looks at big-screen exposure as “just another way to… build buzz and reputation for the film ahead of its Netflix release.” Here’s hoping it pays off in viewing numbers when the film hits the platform on December 23rd (I’m not in any real doubt it will).

Confirmed launch of their ad tier… Rolling out from early November in many major countries’ markets including the US, the UK, FIGS, plus others in LATAM and APAC. Crucially for kids, the streamer has confirmed that the ad tier “will not display ads in kids’ profiles, or in any content aimed at viewers ages 13 and under, even when it’s accessed from an adult’s profile.”

The earnings call had more on how Netflix think the ad tier will land. It’s not something they anticipate cannibalizing existing full fat subscribers. Important points to note on the ad-supported tier is that it’s only available in 720p and doesn’t support temporary content download. There are plenty of folks who wouldn’t put up with that. Two groups that might, though, are also prime password sharers: 1) grandparents, who may be more used to SD quality, and 2) nest-exiting young people who are cash-strapped and more likely to be watching on smaller screen mobile devices. Netflix have been building a content offering for the latter for years, with the likes of Fate: The Winx Saga, Stranger Things, Enola Holmes, and many others. More recently they’ve been courting the former, with series like The Crown and the aforementioned Knives Out movie series. Moving to an ad-supported plan isn’t the only option here, though, as the company rolls out various ways it can monetize account sharing.

Lots to say in the UK… Netflix join UK TV ratings agency BARB (with data becoming available just ahead of The Crown S5 launch—tidy!). There was also disclosure of a load of financial data, including UK subscriber numbers that sit at 13.8 million or around 49% household penetration.

In addition to these headlines… Another key change in Q3 earnings is that the company will no longer provide subscriber guidance to investors. In recent years Wall Street has been fond of using this particular stick to beat Netflix with on share price. Revenue and operating profits will now be looked at as the primary top-line metrics. The earnings letter pulled no punches on how competitors stacked up in this regard:

“Our competitors are investing heavily to drive subscribers and engagement, but building a large, successful streaming business is hard—we estimate they are all losing money, with combined 2022 operating losses well over $10 billion”

For me, the change on subs guidance matched the pivot on content performance metrics from last year, where Netflix stopped reporting number of households who viewed (reach) and moved to hours viewed (engagement). As sub acquisition plateaued, it was going to get trickier and trickier to beat that incredible record set by Squid Game. Better change the yardstick to hours viewed, which they’ll be able to comfortably beat their competitors on for the foreseeable, particularly with the binge drop model. Conveniently, they’ll beat competitors on operating profit too, where their new guidance is focused.

Information and references related to kids content weren’t in abundance this quarter. The Sea Beast got a shout-out as the “biggest animated original film to date” with 165 million hours viewed; however, this was tempered by the admission that animated films were at an “earlier stage.” This is a change of tune, given the streamer has been outputting high end original animated films since Klaus in 2019, followed by The Willoughbys and Over the Moon in 2020. At that stage Netflix’s position was that they were fired up about catching Disney in family animation. It feels like that hubris has gotten a kick in the teeth since.

So what kids content has been popping on Netflix this quarter? On movies, in addition to The Sea Beast, Netflix talked about the importance of pay 1 windows as the “next best” thing to Originals. As highlighted in a previous instalment of this newsletter, the pay 1 window of Sing 2 hit Netflix Global Hours Viewed Top 10 despite only being available in two markets, the US and South Korea. Its US-specific performance per Nielsen Streaming Content Ratings is super impressive. I’m planning a deep dive on that in upcoming weeks.

For kids content, though, we have to say that the value of third-party licensing goes beyond pay 1. Older prequels for recent Illumination theatrical releases also did excellent work. Indeed, Minions & More 1, a 48-minute compilation of shorts dating from the last decade, hit the Netflix Global Hours Viewed Top 10 for three weeks.

For series, the only one to peek through was DreamWorks’ Kung Fu Panda: The Dragon Knight. This actually hit harder than the rebooted Boss Baby when we look across Weeks 1 and 2, despite crashing out for Week 3. No joy for The Cuphead Show! S2, despite the good visibility of S1, nor for the latest preschool series from exec producer Chris Nee, Spirit Rangers. 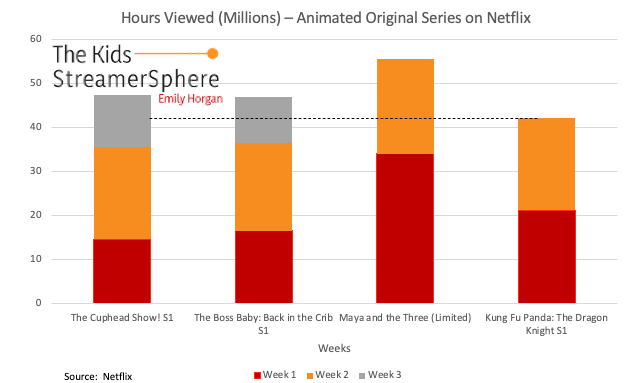 Ted Sarandos finished the call with a massive roster shout-out to a boat load of high-profile titles coming to the service in Q4. But what about the kids/family content, Ted? Why do you leave me to do EVERYTHING?!

On the animated front, there are not one, not two, but three movies worth tracking. Wendell & Wild from the creator of Coraline hits at the end of the month, followed by My Father’s Dragon from Cartoon Saloon in November.  We round out with Guillermo del Toro’s Pinocchio coming in December. Perhaps original animated movies aren’t at such an early stage after all.  In addition to these we can expect a juicy pay 1 window for The Bad Guys spicing things up in the US.

With live action we are in for a treat. The School for Good and Evil dropped this week. Upcoming we have Slumberland starring Jason Momoa, Enola Holmes 2 starring Millie Bobby Brown, and Matilda the Musicalstarring Emma Thompson.

So movies are covered, but what about series? Is it just me, or have these been a bit lacking of late? I mean, we do have the Teletubbies series reboot hitting in mid-November which is showing some strong indicators of interest. Check out the view counter on our What’s on Netflix tweet about it; last time I checked it was at 10.2 million!:

It’s what you’ve all been waiting for.

The first trailer for TELETUBBIES is here! pic.twitter.com/pAeIAal1N9

Another interesting series that popped just this week was Oddballs. This was produced by Atomic Cartoons (Hilda, Dogs in Space, plus some Lego/DreamWorks commissions) and is based on a super successful YouTube channel. Let’s see how it progresses.

But what other kids shows are you really excited about coming to Netflix soon? Please, inspire me! Perhaps I’m frustrated that performance indicators on streaming titles are like gold nuggets unless your name is CoComelon or Bluey.

Oh well, I guess we’ll need to stick to looking at movie performance for now, and there will be plenty of that in upcoming weeks.